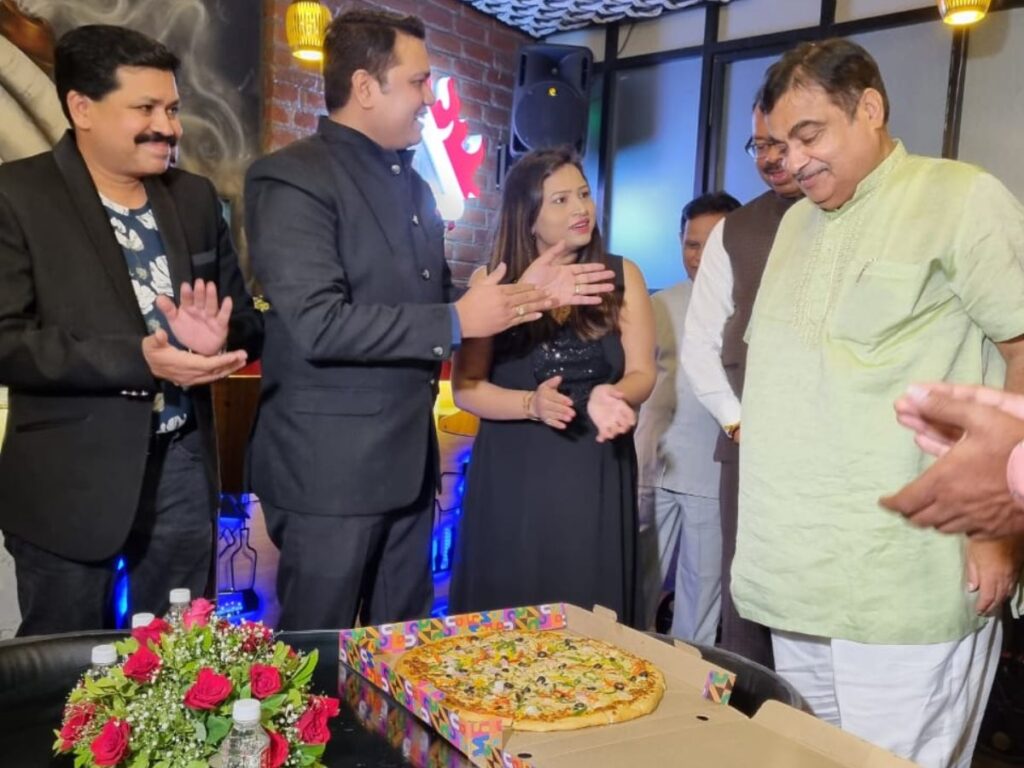 New Delhi (India), July 19: It was an amusing evening when respected Mr Nitin Gadkari walked the red carpet to enter the exquisite Chicago Pizza lounge in Nagpur launched by the legendary Brand Chicago Pizza having well over 100 plus outlets pan India outlets and Winner of Best Pizza Award. It has received a token advance from various franchises to block 90 plus locations to be opened in coming months, wherein the total q Investment to open a Chicago Pizza outlet is approx. Twenty lacs for a takeaway or sit-down and Bar lounges approx 35 lacs INR.

The Delhi-based QSR Chicago Pizza Founder, Mr Vishal Kapur, wants to strengthen its franchise business with a slew of pizza lounges and logistics centres in South, West and East India. Speaking to the media, Mr. Vishal Kapur mentioned that ‘Indian customers can make Indian, Chinese cuisine back home but will always venture outside their home to eat Pizzas plus the Pizza being a major delivery product a Franchise owner can make the maximum output for his location.

Undoubtedly, the Franchise business of Chicago Pizza has been growing exponentially, and the company has been receiving about 50 franchise enquiries daily. Many believe that Chicago Pizza will soon beat Pizza Hut and stand on the second place next to Domino’s in times to come.

More than a decade after its launch, Delhi-based Chicago Pizza is looking to raise Series-A funds for faster expansion. The brand plans to dilute the company’s 5- 10% shares through private equity or venture capital funds. It has clocked over 150% growth in sales in the current fiscal and asserts to increase the revenues to Rs 1,000 crore over the next three years with more store launches, new brand formats, and aggressive growth plans. Speaking about how the company would like to deploy the funds, Vishal Kapur, Founder of Chicago Pizza, said, “A majority of the funds would be used to further strengthen our Franchise business and Sales per Outlet through Nationwide Ad campaign.”

“Though we have seeded outlets pan-India ranging from remote locations of Guwahati to outlets in Bilaspur, Korba, Raipur, Bhubaneshwar, Srinagar, we wish to explore Bar Lounges, ready-to-eat products and setup commissary/ logistic centres in various zones of India to facilitate our Franchise business even better. We have participated immensely in the pizza delivery revolution, which was once captured only by international brands like Dominos or Pizza Hut. Today, customers are more open to brands like Chicago Pizza.

In addition, Chicago Pizza has devised a new franchise model, Chicago Pizza Bar Lounge, offering beer, wine, and liquor with pizza. The brand has finalized ten such Chicago Pizza lounges in Delhi NCR to enrich the experience of consuming pizza and wine or beer. According to Mr. Vishal Kapur, sales from such lounges serving alcohol would be higher, providing even stronger business feasibility to the Chicago Pizza Franchise owners. He added that these strategies with a mix of lounge experience and ready-to-eat products would assist the brand in expanding swiftly.

The big thing in favour of the brand has been its ambitious plan to take its footprint far and wide. Launched with a single outlet in Delhi-NCR in 2007, Chicago Pizza has spread over pan-India through its Pizza Franchise business. Popularly known for its ‘by the slice pizza’ concept and the first in India to device a model of Pizza takeaway, the Chicago Pizza chain operates in two models – company-owned and Chicago Pizza franchise. Another highlight of its services has been the ‘do-it-yourself’ pizza kit that the brand provides to its customers who would like to bake their own pizza with sauces and toppings of their choice.

Next post Raveena Tandon to endorse the brand Garden’s Need, a Leading Manufacturer of planters