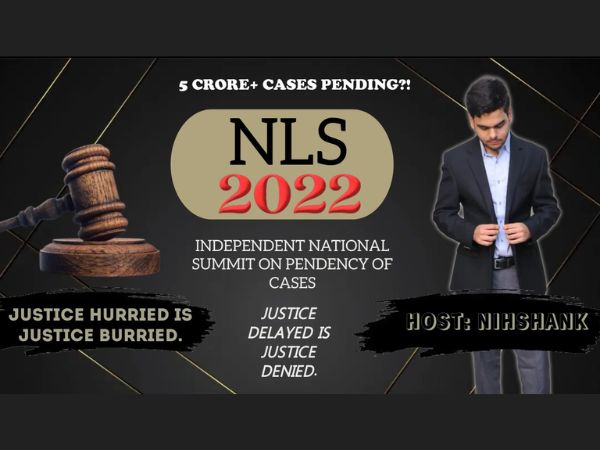 When the March 2020 lockdown was announced, there were 3.68 crore cases across all levels; that number has since risen to 4.42 crores in 2021 (and is currently at 5 crores in 2022). Justice delayed is justice denied, and these delays and inefficiencies caused by the overwhelming dockets in Indian courts have long been a cause for worry. According to the Economic Survey 2017–18, pending disputes make it difficult to resolve disputes and enforce contracts. It further discourages investment, stalls projects, and makes tax collection difficult. It drives up legal fees, which raises the cost of doing business. In light of the above, this summit tried to address the socio-economic implications of the increasing pendency of cases and offer concrete solutions to the same.

The timely access to justice forms an integral part of article 21 of the Indian constitution. The failure of fast-track courts was also addressed during the summit. The quick resolution of cases is addressed by the right to a timely trial in order to improve the effectiveness and efficiency of the judicial system. The idea of a prompt trial was first acknowledged by the Magna Carta, an important piece of English legal history. For the past 2.5 decades. India has always considered speedy justice as a component of social justice, and since the establishment of fast-track courts in the country, this has been increasingly true.

The right to swift justice is part of a comprehensive understanding of Life and Liberty under Article 21. In the case of the accused, they spend years in jail while they wait for their case to be tried. The victim or the party who feels wronged must spend years in court to obtain justice. Both parties suffer emotional, financial, and physical anguish due to the delay. To quote Justice Krishna Iyer, the Indian justice system suffers from a slow-motion syndrome that, regardless of the outcome, proves fatal to a fair trial.  The need of the hour continues to be the liberation of the innocent from the disproportionate agony of the court process and the swift punishment of the criminal.

Adjournments became one of the focal points of discussions at the summit which have led to an increased pendency of the cases. The frequent adjournments that are granted in cases are one of the main elements causing this ongoing nature of litigation. Delay strategies are employed by the parties, which slows down the resolution of issues. Adjournments are frequently requested for several reasons, such as when a file is missing, the council is running late, one of the parties cannot attend, etc.

“While justice delayed is certainly justice denied, justice hurried is justice” buried remarked Nihshank. Mere demand for speedy disposal of cases may indeed lead to reduced quality judgments. The economic impact with special emphasis on the banking perspectives was also discussed in detail. The judiciary has struggled on both the quantitative and qualitative fronts because of inadequate infrastructure, a lack of people, advanced technology, unrealistic expectations, and unclear directives.

Nihshank is an independent creator in the field of edutainment aiming to bridge the gap between education and entertainment and is currently pursuing law at Jindal Global Law School.

Previous post ‘Mo Gharani Sadhabani is a bespoke initiative that fosters holistic growth and development of Odia women entrepreneurs all across the globe – Dr. Soumya Patnaik