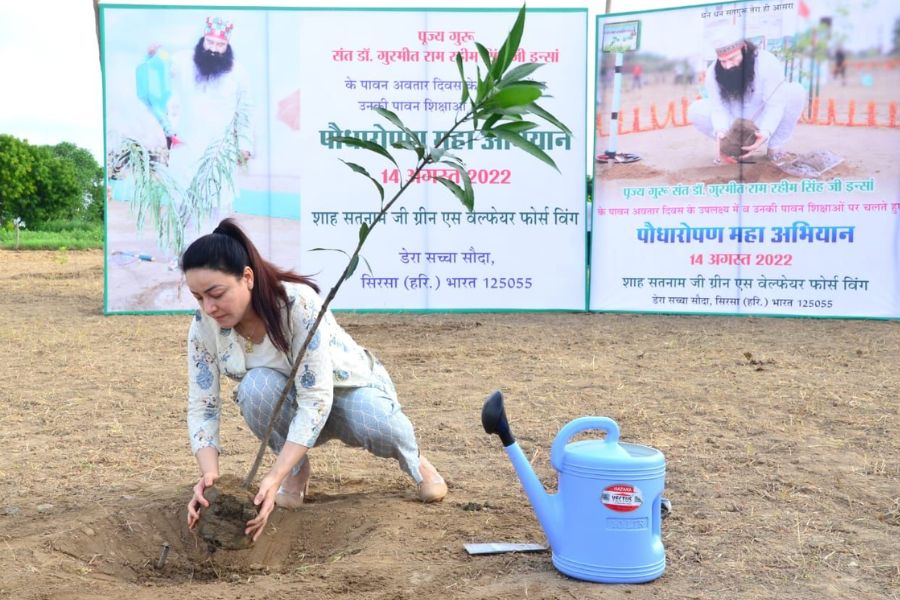 Sirsa India, August 15:  On the 55th holy incarnation day of Revered Guru Sant Dr. Gurmeet Ram Rahim Singh Ji Insan, Ms. Honeypreet Insan, daughter of Revered Guru Ji, planted a sapling to mark the occasion. The followers of Dera Sacha Sauda planted millions of saplings around the country and abroad on Sunday and gave a gift of greenery to mother earth. Ms. Honeypreet Insan and members of the Dera management planted saplings at the  Shah Satnam Ji Dham. The plantation campaign started at 8 am Haryana, Punjab, Rajasthan, Uttar Pradesh, Delhi, Uttarakhand, Himachal Pradesh, Bihar, Jharkhand, Maharashtra, Gujarat and other states of the country and abroad. In this campaign, the followers planted saplings with great devotion and zeal. During this mega campaign,  the dera devotees were seen carrying saplings everywhere and planted many saplings at their homes, farms, schools, colleges, parks and public places.

Along with the plantation, the dera followers also reiterated their pledge to nurture these plants till they become trees, following the teachings of Revered Guru Ji,  who inspired the followers to initiate the plantation campaign in 2007. So far, millions of saplings have been planted all over the world. Dera followers not only plant saplings but also take care of them, water them at a designated time, and prune them regularly, which has resulted in more than 80 percent of the saplings planted by them now thriving and providing fruits, flowers and shade as trees. Revered Guru ji Saint Dr. Gurmeet Ram Rahim Singh Ji Insan was born on the 15th of August 1967 in the holy land of Sri Gurusar Modia, District Sriganganagar (Rajasthan). The followers of Dera Sacha Sauda have so far planted millions of saplings under the guidance of His Holiness. Dera Sacha Sauda’s name has been recorded in the Guinness Book of Records three times for planting saplings. The first record was to plant 68 lakh 73 thousand 451 saplings in 8 hours on August 15, 2009, the second was to plant 9 lakh 38 thousand 7 saplings in just one hour on the same day, and the third record was made by planting 19,45,535 saplings by Sadh-Sangat in just one hour on August 15, 2011.

Mera Tiranga Meri Shaan Abhiyan event will start at 8 am at Daman Square and end at Nandan Kana Square...

New Delhi (India), January 11: “Shaurya Naman” Foundation is an Indian organization established by the youth who are engaged in...

A Footballer from Bhutan contributing his prominent skills in football in Indian FC is none other than Kezang.  New Delhi...