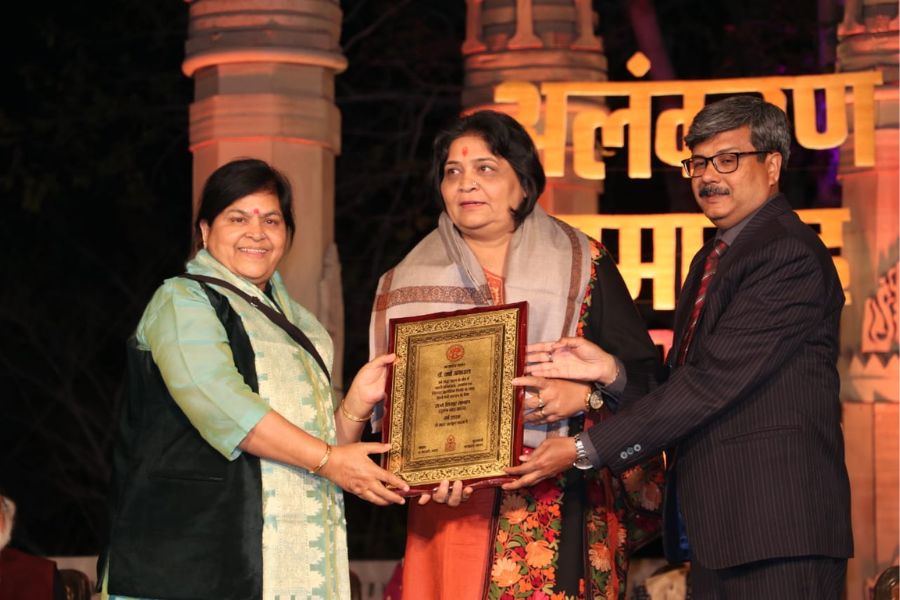 Jaipur (Rajasthan) [India], September 19: Dr. Varsha Agarwal, the first Indian female classical solo santoor player, mesmerized the audiences at the desert storm series in Jaipur, a joint initiative of a non-government organization (NGO) Rajasthan Forum and ITC Rajasthan, and recalled the good old days of the art, and shared her experiences from her initial training.

Born in a traditional Rajasthani doctors’ family in Jhalawar, Rajasthan, Dr. Varsha Agarwal’s grandfather Dr. Kalyanmal Agrawal was a doctor who was fond of music. He (grandfather) thought his son would adopt music, but it did not happen. In conversation with Dr. Ashwin M Dalvi, Dr. Varsha spoke about her journey from Rajasthan to Kashmir to emerge as the first female classical solo Santoor player of Sufiya Gharana of Kashmir and Sopori Baz.

Replying to a question by Dr. Ashwin M Dalvi, Dr. Varsha said, “My grandfather would take me to the musical events and asked me whether I would like to learn music. Santoor mesmerized me, and I often got the urge to play the instrument. Since santoor music belonged to Sufiana Gharana in Kashmir, it was difficult for Dr. Varsha to go to Kashmir and learn it. As the old saying goes, ‘If you want something with enthusiasm, then the whole universe brings it to you. Her first guru was Elahi Bakhsh took the tabla training from the late Shri Girdhari Lalji Dangi.”

Dr. Varsha said, “My first guru of santoor pandit Lalit Mahantji of Ujjain first refused to teach me santoor, saying that by marrying in a Baniya family, I would forget playing santoor. I wrote a letter to Guruji stating that my guru, parents, and husband are santoor players. I am a Gandabandh disciple of tabla wizard pt. Lalit mahant Ji and renowned Santoor player Saint of santoor, king of strings Lt. Padma Shri Pandit Bhajan Soporiji.”

Dr. Varsha Agarwal has been honoured with the ‘First Lady of Santoor’ award by the President of India and the Ministry of Women and Child Development in 2018. Recently Madhya Pradesh govt honoured her with Durlabh Vadya Vadan Shikhar Samman in the field of santoor Dr. Varsha is one of the few female Santoor players from Kashmir’s Sufiana Gharana and is also an accomplished artist of Sopori Baz. She has the credit for playing first santoor sitar jugalbandi at the international level in many countries.

After years of hard effort and discipline, she is now regarded as one of India’s top artists, having performed on All India Radio and Doordarshan, as well as in 62 countries. And released 6 CDs.

One of her santoor CD, Morning Melody, was released by Baba Ramdev Ji. Her other two albums, Love the Nature & and Call of the Hills, are quite popular and have been awarded many times in the USA, Europe, and Canada.

She is a renowned santoor player and a professor of music vocal at G G P G College, Ujjain with a PhD. Research Guide Also, and she aspires to bring classical music to the masses, particularly the youth.

“Any artist, including myself, is always hungry for praise. As a classical musician, the potential to reach out to more people is both a long-held desire and a struggle,” she explains.

THE HERO SHE IS By Arushi Arts at India Art Fair 2023 Arushi Arts Celebrate Living Traditions and Women Artists The...

New Delhi (India), February 7: “It is only when I chose honesty and the need for help that the idea...

New Delhi (India), February 6: For Dr. Jasmin Prajapti pursuing his MBBS and becoming a doctor was a distant dream...

Nagpur (Maharashtra) [India], February 4: A four-day book fair has been organised in the city by Kitab Lovers, specialising in...